All About All Saints’

ll Saints’ is an inclusive faith community with a moving worship life.

All aspects of our shared life are offered to draw us closer to God and our neighbours, changing the world around us as we go!

The History of All Saints’ Church

Located in downtown Windsor, a new congregation was established by St. John’s Anglican Church, Sandwich, in 1852 to meet the needs of the expanding village of Windsor. After the parishioners had convened for a few years in local halls, the church, which was described in the newspaper as “the prettiest church in Canada West,” was built and dedicated on September 10 1857. By 1875 the north and south transepts and bell tower had been added, giving the church its present façade. 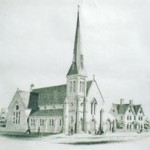 This reproduction, which dates from 1871, was found in a pillar of the church while it was under reconstruction. It was taken by the rector, Rev. John Hurst, on a trip to England to assist him in raising funds for the building of the spire.

Originally, All Saints’ was located across the street from a military barracks which also served as temporary housing for fugitives escaping slavery on the Underground Railway. Over the years, municipal, police and court buildings, (and most recently, Casino Windsor) were erected in the area which came to be known as City Hall Square. 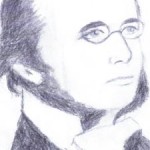 The driving force behind the establishment of the parish in Windsor was the Rev. E.H. Dewar, who became the first rector. He continued to serve in a dual capacity as rector of St. John’s.
According to all reports, he was most scholarly and energetic, involving himself in all the affairs of the growing village. He was keenly interested in education, and assisted in establishing the first public library in the community. The Windsor Herald praised him for his mental powers and civic interests. 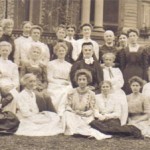 Ever since the first church bazaar in 1856, women have been at the heart of fund-raising and other social events in the parish. The first formal organization of women came into being in October 1890, when a branch of the Women’s Auxiliary was established. A photograph taken in 1910 commemorates a celebration by the group, which began a period culminating in the First World War, when members performed patriotic work in support of servicemen at the Front. 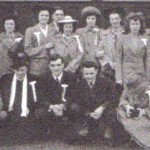 A vibrant Anglican Young People’s Association, which flourished for a number of years, resulted in several popular minstrel shows and a spiritual home for many present seniors who continue to assemble yearly to this day. The photograph shows a group of AYPA members gathering at the train station to attend a conference in Chatham in 1942.

Historically, All Saints’ has been well known for the quality of its church music and choirs. Well-known Canadian composer, Walter MacNutt, was the organist and choirmaster of record from 1950 to 1953. Dr. Graham Steed was brought in from B.C. in 1959 and was music director until 1962. Additionally, he founded and led community singing groups. Currently, the incumbent music director is Professor David Palmer, who has held this post since July 1, 1968.

The choir, consisting at the time only of men and boys, gathered for a photograph in front of the Rectory in 1895. The rector, Canon John Hincks is in the centre of the back row, and the choir director and chorus master, Ed Wilkinson, is also in the back row, 5th from right.

A movement to involve the parish in social service work in the 1950s resulted in the hiring and graduate school education of curate T. Neil Libby, who founded St. Leonard’s Society to provide transition into the community for prisoners released from federal penitentiaries and the Neighbourhood Centre, which operated several much-needed neighbourhood programmes, including the Scott Hall Co-Op, a popular co-operative day care centre. 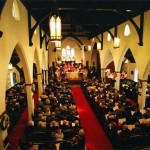 All Saints’ is unique among North American Anglican churches in having the only known Girl Guide Chapel. It was dedicated on 9 June 1935 and built with memorial funds from the bequest of William and Annie Scott. The Guide Chapel continues to be used frequently for small services. 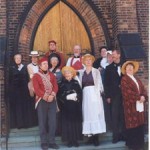 All Saints’ celebrated the 150th anniversary of its establishment in 2002, with a year-long calendar of events and special services, including a re-enactment of a typical service of the early days. The occasion was also marked by the publication of a new history of the parish by Joanne and Conrad Reitz, entitled Into the New Millennium: All Saints’ Anglican Church, Windsor, Ontario, 1852-2002.